Family Guy: Back to the Multiverse 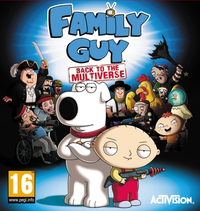 Family Guy: Back to the Multiverse is a third-person action-adventure video game based on Family Guy. The game was first released on November 20, 2012, for the Microsoft Windows, Xbox 360 and PlayStation 3 platforms. The game was developed by Heavy Iron Studios and published by Activision. It features single-player and multiplayer game modes, and received generally mixed reviews from critics. In December 2014, the game was removed from Steam's store.[1]

The player assumes the role of Brian and Stewie Griffin as they both travel through parallel universes of Quahog in an attempt to suppress Bertram's destructive plans. The game is considered a sequel of the eighth season episode "Road to the Multiverse".[2]