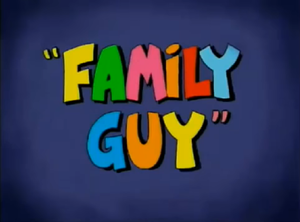 Family Guy logo as seen in the pilot pitch

The pilot pitch of Family Guy was developed sometime during 1998. The episode has several similarities and differences to what would become the series premiere, "Death Has a Shadow", which aired on January 31, 1999.

It was originally a 15-minute episode. However, as of 2020, only the first seven minutes of the pilot has been accounted for publicly via online videos. Several stills from the episode also exist.[1]